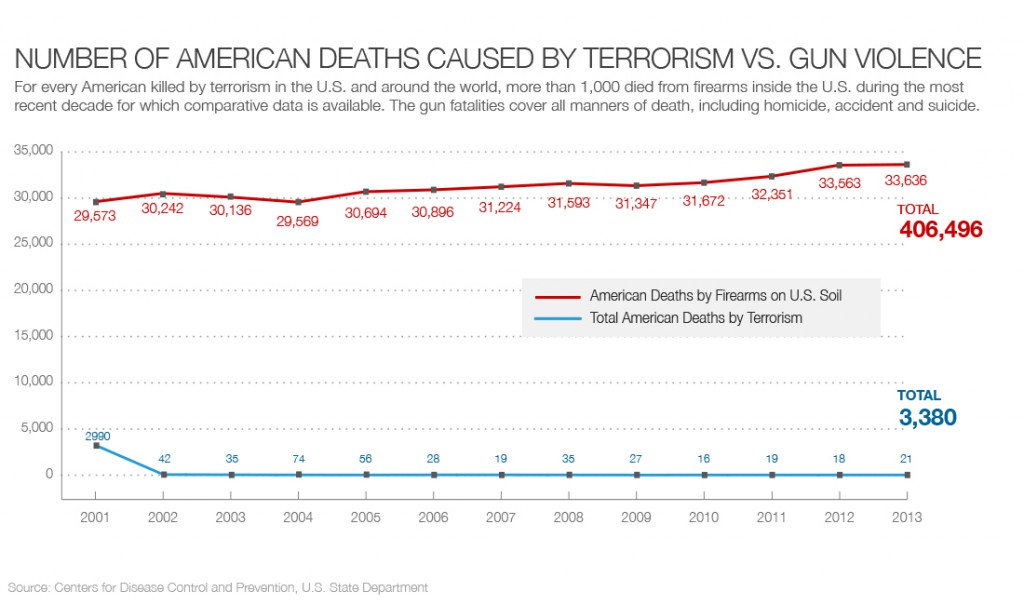 The contrast in the chart above displays a startling perspective. 3000 people lost to Terrorism is shocking enough, but over 400k lives lost to gun violence? Horrifying. To make a legitimate impact on these numbers, *all* Americans must unequivocally decide to shift their efforts and focus on the escalating issue of gun violence right here at home.

Behind the Bloodshed: A Timeline of US Killings by USA Today

USA Today went above and beyond the President’s request to tally the data on gun violence in America. They’ve created an interactive presentation of their findings including shocking statistics and graphical data on Frequency, Triggers, Weapons, Failures, and more. Explore the presentation’s in-depth resource here »

Bureau of Alcohol, Tobacco, Firearms and Explosives 2014 Trace Data Infographic
“The Bureau of Alcohol, Tobacco, Firearms and Explosives (ATF) is the federal agency that is authorized by Congress to stem firearms-related violent crime and to regulate the firearms industry in America. ATF’s National Tracing Center (NTC) assists domestic and international law enforcement agencies by tracing the origin of firearms that have been recovered in criminal investigations.” Source

The ATF’s process for tracing the original source of a gun sale using serial numbers and descriptions is an integral part of the White House’s plan to reduce gun-related violence. However, the ATF’s outdated system for tracing this vital information is continually placed under scrutiny as to when, or even if, their tracing process will ever be upgraded for the modern age. Laws created decades ago preventing the creation of a national registry of gun owners is one of the many reasons the ATF’s antiquated setup remains so. The sooner upgrading this system becomes a priority, the sooner these stats can improve their accuracy and actually make a difference toward preventing gun violence in the US.

2015 Fact Sheets: Federal Legislative Gun Issues by Center for American Progress
“While the United States has some federal laws designed to prevent gun violence, these laws have significant gaps that continue to allow dangerous people—such as felons, domestic abusers, and the dangerously mentally ill—to have easy access to guns.” Source

The experts at the Center for American Progress have collected a massive amount of data on Federal Legislative Gun Issues and used it to create easy-to-read fact sheets for the public. Check their site often as they continue to update and add more data through the year.